For this report, our SOC analyzed the incidents we investigated in January 2022 to determine the top attack vectors used by threat actors. Here’s what stood out this month:

Keep reading for details and our tips for what to do about all the above. 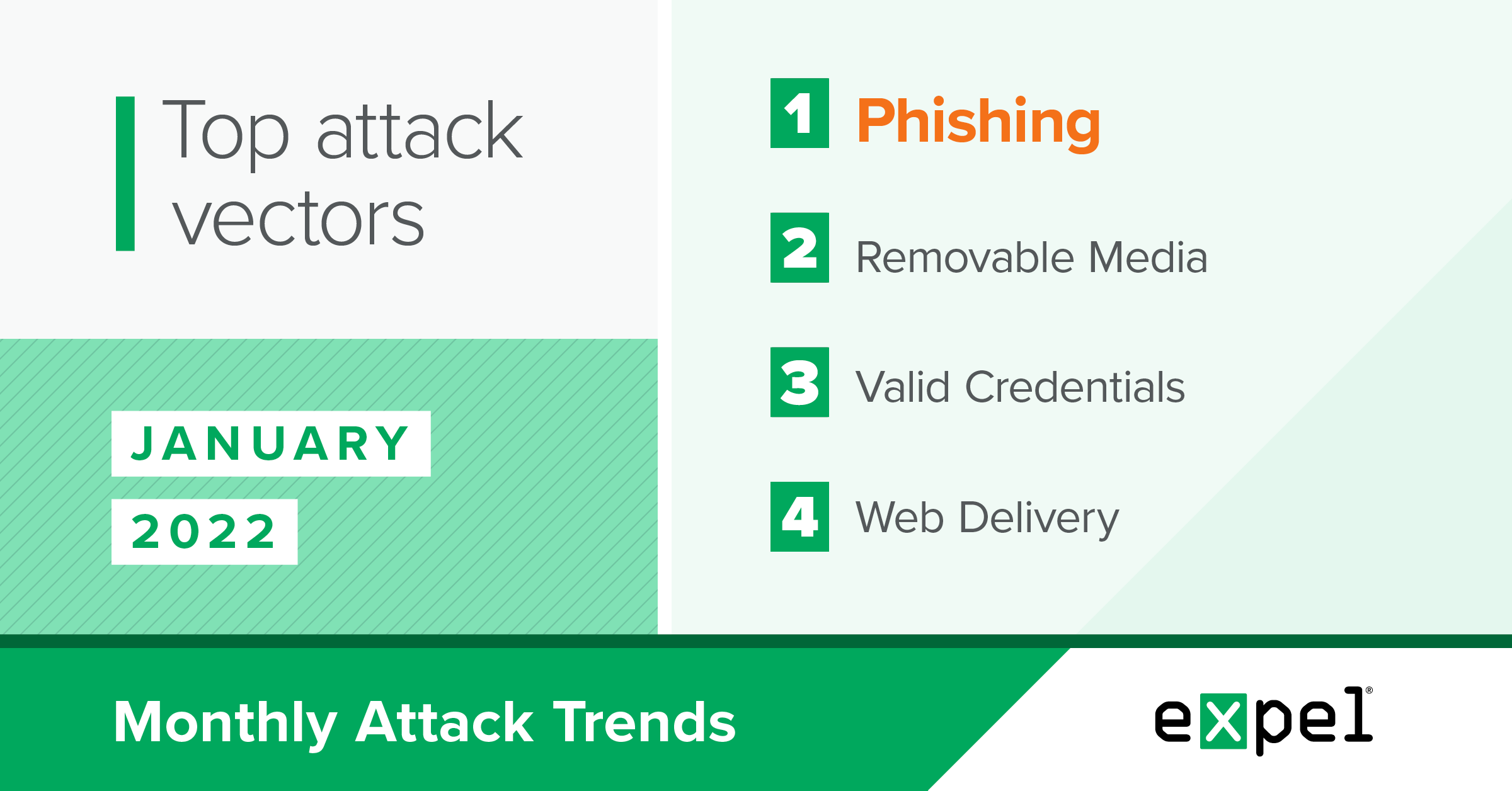 TL;DR: Removable media, in particular USB-based storage devices, are still a relevant threat to your environment.

In January 2022, removable media were responsible for nine percent of all incidents we responded to. That increases to 20 percent for incidents where the initial infection vector involved a physical endpoint (in other words, removing incidents involving a cloud-based service).

While security awareness training has focused on USB devices for years and some orgs require approval per-device before connecting them to a company-owned asset, these devices continue to be used in business environments because of their convenience.

And usage doesn’t just apply to known and trusted USB devices. In fact, a 2016 study examining what people would do if they found a USB in a parking lot showed that nearly 50 percent of people would plug an unknown USB device into their computer. While human curiosity and impulse is likely just as high in 2022, maybe we can hope the rise of remote work has made the discovery of office parking lot USBs less likely?

With that said, even trusted USB devices are often infected with malware variants that search for external storage devices connected to a victim host to infect them and spread further. This risk is much greater for endpoint users who can transfer USB devices from personal devices to business assets.

In January 2022 alone, we saw the AsyncRat, Valyrian, Gamarue, Agent Tesla, and Forbix malware families attempt to spread through USB storage devices. We also saw additional generic malicious worms including one deployed as a hidden VBScript script file on the device.

It’s highly likely that these malware variants would have tried to infect any other external USB storage devices attached to these systems had they achieved their initial infection without detection.

A variety of variants

In January 2022, no single malware variant dominated the landscape of identified payloads among incidents we responded to. Here’s a list of malware variants we identified, with no variant making up more than 15 percent of the total:

In addition to these malware families, we also observed:

This wide variety of malware and payloads demonstrates the abundance of malicious software and tooling at threat actors’ disposal. The continual economic incentives of cybercrime guarantee that malware families and their variants will continue to evolve.

Most of the malware samples listed above established a connection to a remote command and channel, though they took different obfuscated paths and stages to reach that point in their execution. Regarding initial infection vectors, we also observed a variety of techniques to deploy these malware variants, including:

To sum it up: the info in this section shows that defenders need to make sure they don’t hyperfocus on any particular malware variant or specific tool or technique used by threat actors, but rather focus on a layered approach to security that can detect and prevent the varied and continually evolving malware landscape. Regarding identification of samples you may encounter, open source intelligence (OSINT) tools for malware are a great way to identify a malware family without needing a full-time malware reverse engineer on your staff.

TL;DR: We saw an increase in fake Norton invoices and CEO impersonations emails in January 2022.

We noticed an increase in the number of emails containing bogus Norton invoices for Norton Antivirus software purchases.

The invoices generally include a phone number to call if you have questions about your recent transaction. These emails usually come from spoofed sender addresses that appear as if they’re from Norton Security or other legitimate businesses that sell Norton Security products, like GeekSquad. We’ve also seen threat actors use the QuickBooks platform to give the email legitimacy.

Threat actors aim to persuade recipients to call the phone number provided, then plan to scam victims out of money by requesting a payment method for the invoiced amount. They also may try to make recipients install third party remote tools that grant access to their computers. 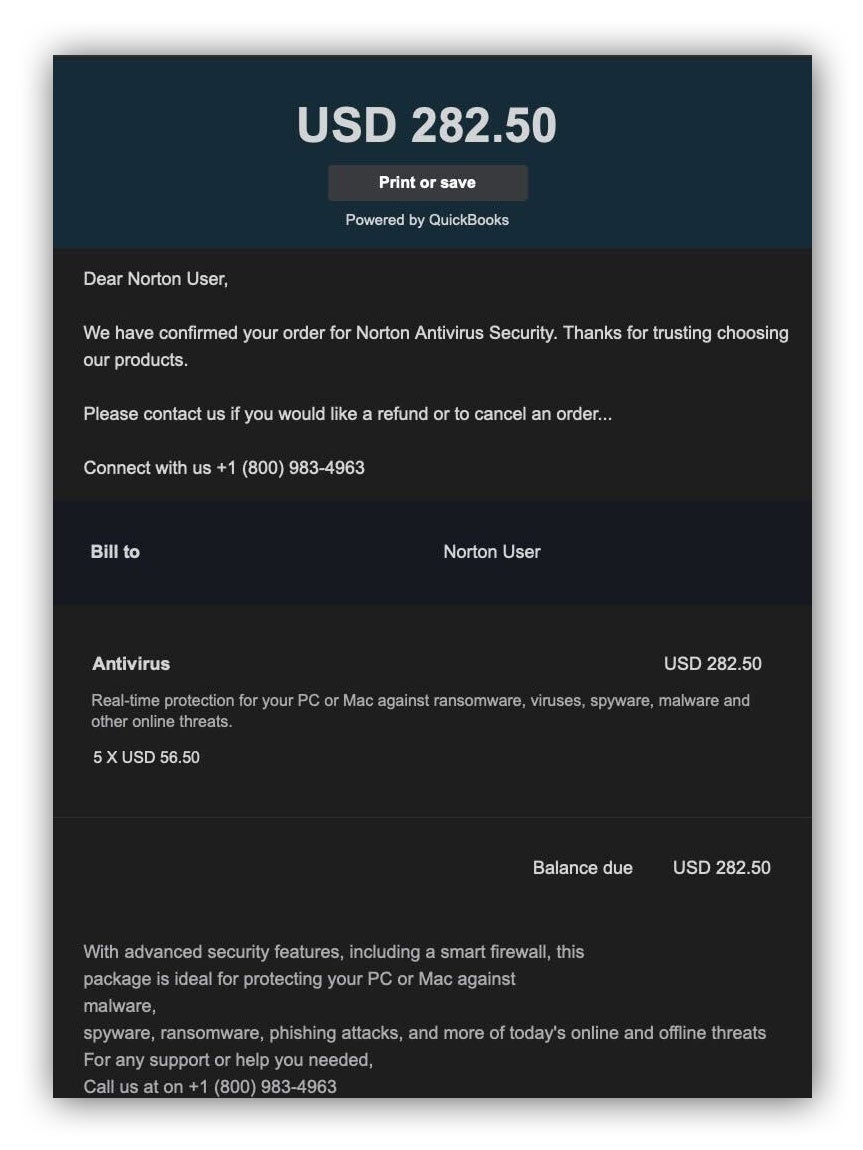 Because info about CEOs is usually widely available online, CEO impersonation is a common occurrence and effective tactic for attackers. Most CEO impersonation email submissions convey a sense of urgency in the email’s body and subject.

Here are a few phrases that we’ve come across:

Impersonation emails also tend to spoof an external account to make it seem like the email is coming from the organization’s CEO. Attackers then often like to move the conversation away from email to lower the chance of being discovered. Asking for cell phone numbers allows them to use calls or texting for further interactions. Threat actors will usually ask victims to purchase gift cards and send pictures of the redemption codes. 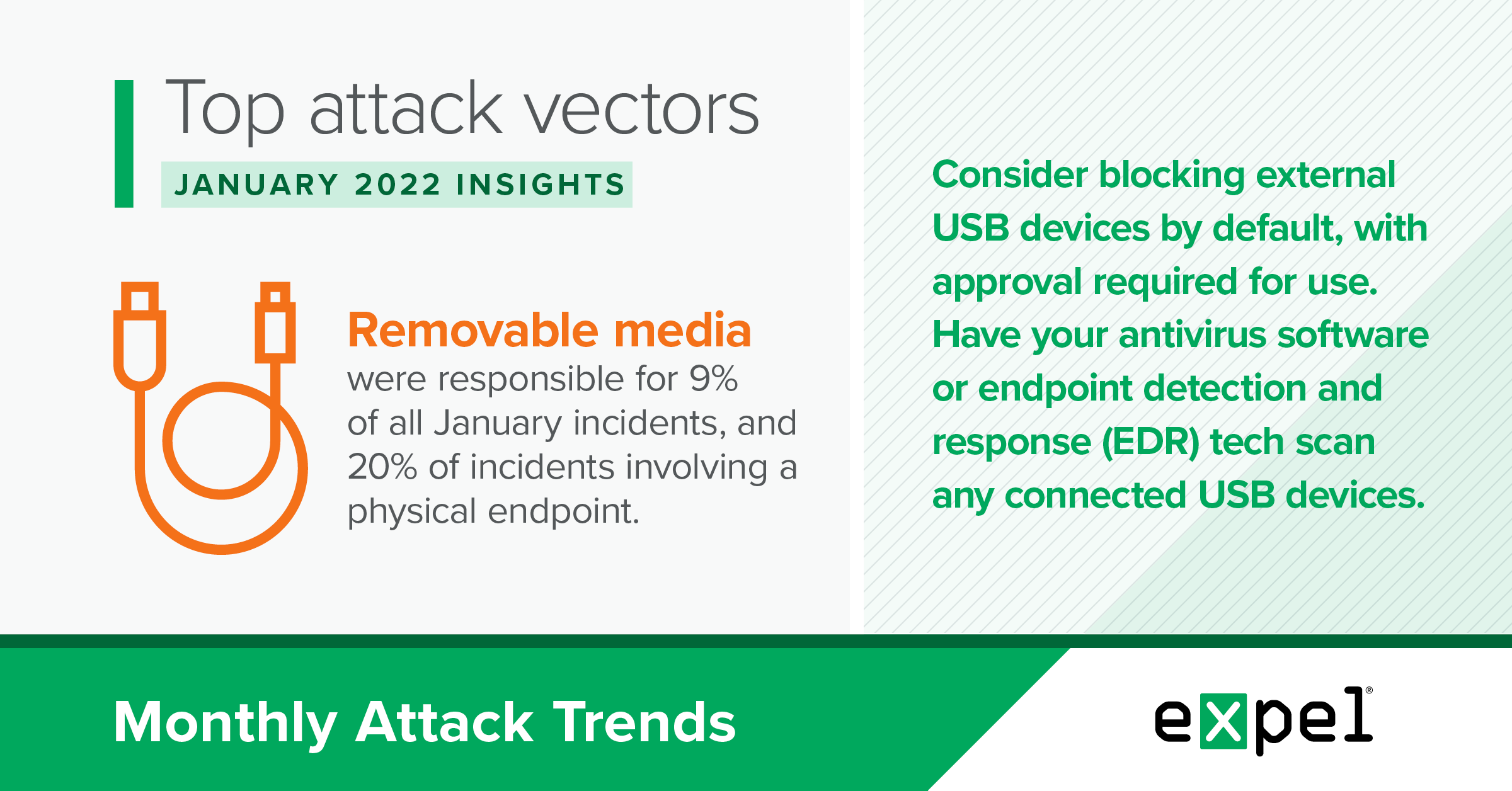 Phishing remained in the top spot for infection vectors in January, but we also saw a wide variety of malware and an old friend – the USB flash drive threat – make a return.

While many of us may assume the days of bumping into a random flash drive in the office parking lot are over, these devices remain a target for threat actors. It’s important to remember that USB devices allow threat actors to use a variety of malware families to gain access to additional systems. Many malware variants can continually search an infected system for connected external USB storage devices and infect them, as well. Companies should have security controls in place to block endpoint users from inserting USB flash drives previously connected to personal assets into company assets, and only allow approved storage devices for company assets.

Speaking of malware, we also saw a range of malware families this month, identifying 11 families across payloads for incidents we responded to. And no single family made up more than 15 percent of the total number of malware samples. We also identified a malicious Chrome browser extension and artifacts from a ransomware sample. With such a variety of tools at their disposal, attackers are clearly deploying a variety of tactics to achieve their goals.

While these malware families used different obfuscation and payload stages, the most common end goal was establishing a command and control network communication channel back to the attacker. Companies should make sure that they have complete coverage of their endpoint security controls across all of their devices, and consider subscribing to OSINT malware feeds.

Phishing remains as effective of a tactic as ever, with two particularly notable trends in January. Threat actors are sending convincing Norton Antivirus invoices to trick users into paying them. This social engineering scheme continues over the phone after users who received the email call the number provided, when threat actors will typically request payment information.

Threat actors are also sending fake emails appearing to come from a company’s CEO. These emails rely on urgency to hopefully prevent targeted employees from taking the time to verify features of the email that would point out it isn’t legit. It’s essential to regularly conduct security awareness training for employees to help them identify indicators of a phishing attempt.

We’ll be back with insights on February’s top attack vectors. In the meantime, have questions about this month’s data or what it means for your org? Drop us a note.

The Grinchy email scams to watch out for this holiday season

As the holidays approach, cyber Grinches are targeting phishing campaigns to steal data, credentials and more. Look out for these email scams while online shopping and checking your inbox this season.
Read More
Share This x
Back To Top